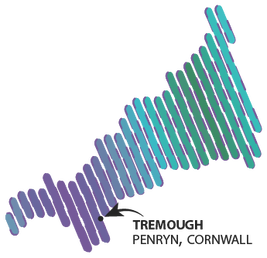 The second research conference for the Cornish language took place on Wednesday 24 and Thursday 24 September 2018 at Lecture theatre 4, Peter Lanyon Building, Penryn Campus, Tremough with thanks to the Institute of Cornish Studies for hosting the event.

​An Gernewegva: A community living through the Cornish culture. Creating a geographic environment where the Cornish culture can thrive
​
When we achieve this dream there will be a real place:
What are the benefits?
The Cornish language and culture is potentially a major contributor to Cornwall’s social and economic regeneration. In places that are amongst the poorest in Britain, it can offer people a renewed sense of confidence in themselves and each other, raising their morale and helping them to tackle disadvantage and build a resilient future. It can increase their commitment to those around them and the places where they live, so that they strive to succeed. It can encourage them to make things happen, whether that means getting involved in voluntary activities or making business and industry work. It can help build and strengthen friendships, relationships and networks and provide the means to welcome and integrate new residents.

In other words, Cornish traditions can be used to build social capital and raise human capital, enabling people in all areas of their lives. The project proposed here could provide a powerful engine to drive re-emerging confidence in Cornwall’s own special identity.

Cornish syntagmatic lexical relations: Collocations, and multi-word lexemes​
Cornish syntagmatic lexical relations include collocations and idioms, and appear on a cline from free combination through recurring combination and restricted combination to fixed expression. Collocations are significant according to their frequency of occurrence. In other words, if an expression is heard often, the words become ‘glued’ together in our minds. To varying degrees, collocations are restricted with regard to the words with which they combine. Common features of collocation include non-substitutability and non-modifiability. Some expressions, such as idioms, are totally fixed.

​However collocation is not merely concerned with the frequency with which words co-occur. Firth writes “You shall know a word by the company it keeps” (Firth 1957a:11), and that “Meaning by collocation is an abstraction at the syntagmatic level” (Firth 1957b: 196). Thus one of the meanings of nos (‘night’) is its collocability with tewl (‘dark’), and of tewl (‘dark’), of course, its collocation with nos (‘night’). Furthermore collocates of any given word form distinguish that word’s different senses. This is particularly noticeable with collocations in which a verb or a noun combine with a preposition, for example: mires dhe ‘take care of’, mires orth ‘consider’, mires rag ‘seek’, and mires war ‘observe’. This presentation is illustrated with examples from Middle and Late Cornish.

Strategies in translation: a Cornish-Italian insight​
In dealing with translation - including literary translation - it is possible to make use of some strategies that are commonly codified by widespread translation theories. In dealing with the specific field of poetic translation, such practice often offers a number of opportunities to test how effective - or not so much - common translation strategies are and/or how translators have to take the challenge of not relying on what is commonly codified and make use of personalised strategies instead which imply more creativity and inventiveness. This paper will illustrate some examples of translation strings from Cornish into Italian from some poetic works by Pol Hodge and give an idea on what kind of strategies were used - or not used - in the translation process into Italian.
​
Download: abstract [pdf]
Pol HODGE

Why develop a Standard Teaching Alphabet for Cornish?​
This paper discusses the recent history of using an alphabet for the teaching of the Cornish language, as compared to MFL teaching, and shows that the current proposals have been based on the vagaries of English phonology. This paper goes on to compare the situation with Breton and Welsh and proposes the adoption of a Standard Teaching Alphabet for the Cornish language that could be implemented in Early Years as well as Primary, Secondary and Further education sectors rather than Adult Education which has often played host orthographical disputes. Proposals are made to resolve the issues of vowel length, Late Cornish phonemes, geminates and diphthongs. Finally a number of suggested formats for resources are given that can be offered for Beginners that are age appropriate.
​
Download: abstract [pdf]
Peter JENKIN

Some little-known and/or underappreciated sources for late(ish) Cornish​
In the absence of a serious effort to publish the entire corpus of pre-1800 Cornish language texts, reconstruction of the language rests on insecure and partial foundations. Some important texts for the understanding of Cornish seem never to be referred to by revivalists or language scholars or are only known from secondary sources. A prime example of the latter is Pryce’s Archaeologia Cornu-Britannica (1790), merely an abridged edition of Thomas Tonkin’s manuscript of the same title from the 1730s. Parts of Tonkin’s master-work also show up in other poorly-edited forms such as in the publications by Davies Gilbert of Mount Calvary (1826) and The Creation of the World (1827). Tonkin’s manuscript was of course itself a compilation of earlier sources, notably the Cornish plays but also including other texts. There are manuscript materials unknown to Tonkin that have come to light since but that have also often not been fully published. Instead of re-ploughing the same few furrows time and time again to understand the Cornish language perhaps it is time to have a go at the entire field.
​
Download: abstract [pdf]
Kenneth MacKINNON
University of Aberdeen

Henderson’s Black-more revisited: disinterring a lost landscape​
Charles Henderson’s original article of 1927 presents place-name and topographical evidence of tin-bounds on Black-more in the 17th Century taken from estate records, court rolls and a contemporary map. These list the features of the area and the tin-bounds in Cornish and English. These evidence rapid linguistic change and provide written memory of an upland now obliterated by china-clay extraction and wastes. The revisiting of Henderson’s original essay applies a ‘layered landscape’
perspective, and examines place-name evidence further in the light of subsequent research and development of this field. The topographical features and toponymy are further examined in subsequent mapping of the early 19th – late 20th Centuries, together with an aerial traverse of the bounds in the early 21st Century by Google Earth, presenting a present-day view of the area. Henderson’s original data can be used to illustrate and interpret changing land-use, social change, and also changing community language at a time of crucial language-shift. It is suggested that the corpus of Henderson’s personal archive of old legal documents could yield further evidence of changes in these three fields, and in particular enable a clearer picture of linguistic change in other areas of Cornwall.
​
Download: abstract [pdf]
Mike TRESIDDER
MAGA

​Cornish a post – modern language.
Although in a recently published paper Dave Sayers and Zsuzsanna Renkó-Michelsén talked of the Cornish revival in terms of a once dead language undergoing ‘…a remarkable transformation’ they, nevertheless, reiterate the question asked by Berresford- Ellis in 1974 as to whether the revival movement:

This paper argues that Cornish, liberated from the strictures of modernism, has the opportunity to become viable and confident enough to assert itself in public. Challenging what we have been told by ‘others’ about Cornish history, adopting an attitude that refuses to ‘decide’ or ‘resolve’ Cornish based on the demands of how a language ‘should be’ etc. frees it up to become a more attractive proposition. Recasting Cornish as a vibrant post-modern language more than dispenses with the charge that it an invented language and refocuses the mind as to where future efforts should be focussed.
Embracing the occasional unstable signifier, inventing a new vocabulary to catch up with the times, using an idiom that is not paralleled in its development to English and being a little more relaxed about grammar does not mean Cornish is like Klingon – but it might just appeal to young people!
​
Download: abstract [pdf]